If you are like me, a $500+ camera slider would be awesome, but it’s just out of your price range. I was able to borrow one for some of the shoots on my show, Peculiar. But that may no always be possible, And I wanted one for other shoots I might do. So I started looking at low cost alternatives. That turned out to be pretty hard to find.

There are a ton of DIY slider projects out there, some under $10. But I wanted something a little more functional than those. I ran across a company called RigWheels. This seemed like a better alternative, and you could build several set ups with your wheels. Still, $115 for a set of 4, and if you add a base the cost goes to $250. Then I found a competitor’s product, the CamOnWheels CW2. These were $60 for a set of 4. That was better, but still more than I wanted to spend. Surely there had to be a cheaper alternative.

I took a trip to my local parts surplus store. I found these:

I didn’t know exactly what they were, but they looked a lot like the RigWheels/CamOnWheels products.

It couldn’t be used just like it was, but it was a start. I figured I could make some modifications and end up with a useable set of wheels. These were priced at $2.50 each. I snagged several. They looked pretty heavy duty.

Turns out they were made by Stanley and part of a Pocket Door hardware kit: STA-BP150N-41

New, they run about $10 for the kit. That will give you 2 sets of wheels. I found them for sale online at Hardware Hut. 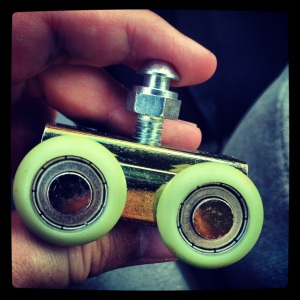 A little bit of experimentation with bolts and nuts, and I came up with this design:

The extra parts cost another $7. You could, of course find a different style of wheel assembly that would also work. I made a 2 part video about how to build the slider with these pieces and some PVC pipe and a little hardware.

According to the Hardware Hut website, a pair can hold doors up to 150 pounds. So they are very heavy duty. I’m considering using 8 sets to build a dolly that can hold a person and camera set up. In addition, Stanley has track that these wheels can run in as well: STA-BP250-01-96 (Also available in 72″ lengths) I have not used any, but that could be a nice addition to a slider set up.

Here are the tools needed:

In the video I show a base made of plexiglass. For lightweight cameras (Flip style, iPhones, etc…) this will work, but for DSLRs and larger use another material. I have upgraded my base to a metal plate ($1.75 from parts surplus store) Wood or metal should serve well.

Caution: When drilling the 4 holes for your wheels is very important to get your holes parallel so you can use the slider on a track. Measure twice, drill once.

Optional upgrades for this project would include a better ball mount or tripod head for your camera.

Optional upgrades for this part of the project would include the rails made by Stanley for these wheels: STA-BP250-01-72 (Also available in 92″ sizes) You would need to flip the wheels so they were on top of the base, which would travel under the rails.

The shake you can see in the slider footage on this video can be attributed to a DSLR on that base and ball mount. A solid base and stronger mount will eliminate that shake when using heavier cameras. See more footage shot with a Flip camera here: 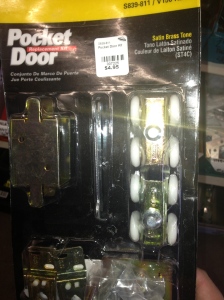