The Rode Reel short film competition is one of the largest in the world. Entries from 88 countries are all under 3 minutes long and must have been shot using a Rode microphone. In 2017 the prizes total over $500,000. If you watch finalists from previous years, many of them are just amazing looking, amazing sounding.

How can you or I, average independent filmmakers, compete? Why should we enter if we probably won’t win?

Perfecting your craft. Experience always teaches you. I made my first actual short documentary film. I learned a ton in the process and got to experiment with a new genre. Every project you complete has the potential to help you learn and improve. Do you think those Rode Reel finalists just woke up and magically were amazing filmmakers? No, they worked and worked. This is a chance for you to become a better filmmaker.

Exposure. We all have a sphere of influence. We have an existing audience, whether it’s just family and friends or something larger. But entering the Rode Competition will expose your work to potentially thousands of new viewers. Viewers who will meet you for the first time, who might find your social media contacts, who might subscribe to your channels. Viewers who could be fans of your work. And those viewers are available for free.

Free T shirt. And maybe more. If you’re among the first 1500(?) entries Rode will send you a nifty Rode Reel T shirt. Sometimes they throw in some of their small products. Who doesn’t like free stuff?

Deadline. Most of all, committing to enter places a real deadline in front of you. Talk is cheap. If you are actually a real filmmaker, what films are you making? A deadline puts a real goal in place. I wanted to enter last year, but I never committed. So I never entered.

So, want to see my entry? 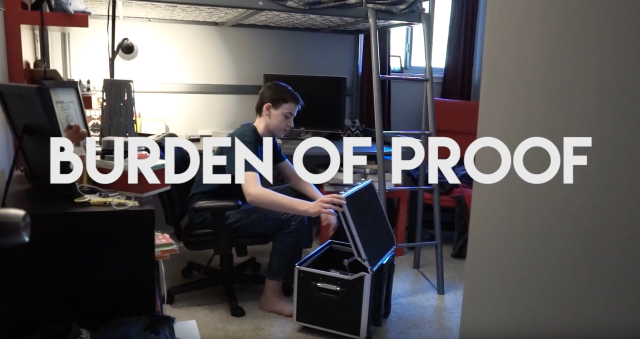 You can watch it here: https://www.rode.com/myrodereel/watch/entry/3102 Hope you enjoy it. If you did, please take a minute and put in a vote for the People’s Choice award.

Before I submitted my film, I watched some of the finalists for that category in 2016. They were awesome. None of them were telling a story of an event. They were more like showcases, testimonies with nice B Roll. After completing my Rode Reel entry, I know why.

Trying to tell an actual story in 3 minutes, a non scripted story, is extremely hard. My film has a beginning, middle and an end. (Spoilers) There’s a mid point crisis and turn into the 3rd Act. But it all happens in 3 minutes. So it’s fast. I cut so much good stuff out I’m seriously considering an expanded version at a later date.

It’s not perfect, but it isn’t terrible either. And I can guarantee my next documentary will be better because of what I learned doing this one.

I’ve been working on a short documentary about my son’s last speech and debate tournament, specifically focused on the Team Policy debates in which he competed. It was a guerrilla style shoot. I had permission to shoot his teammate, but no one else. I could not disrupt the competition any more than any parent with a camera might. No extra lights. No extra people. Just capturing the event in real time with my Sony a6000, 3 prime lenses, and a Rode Smartlav+ microphone recorded into my phone. It was a true Run & Gun situation. Here are a few things I learned…

Story. Doing an actual documentary is different than most of the work I’ve done. I know how to shoot and edit a testimony video, but that’s not a documentary. Before the tournament, I spent time mapping out the structure of the short film. While I didn’t know what would happen, I did know the sequence of events, so I laid out the possible plan and tried to capture the actual events as they happened. As the tournament progressed, I could see how things would fit into my traditional story structure.

Pack Light. Because I was a one man crew, everything I needed was with me, all the time. I had gone through my gear, and left much of it at home. But I was still carrying around a medium sized camera backpack. And I still had gear I didn’t need. In order to grab my camera for a quick shot, I had to take off the backpack lay it down somewhere, open it up and pull out the camera. To downsize a bit more, and make access to gear a bit faster, I just ordered a camera sling bag. It’s large enough to carry a camera and a couple of lenses, etc… But smaller than a back pack and you can sling the bag around to the front, and access the gear on the run.

Invest in a zoom. Lens swapping is a pain. And real life doesn’t wait.

When shooting on a set, there is always time to swap out a lens. In between takes, you can switch over to a different focal length of the super fast prime you have. But in a documentary shoot, people aren’t waiting. Life is happening, the event is going on. Not only do you have a chance to miss the shot, but you might also disrupt the very event you’re trying to capture. During one debate round I was using my 19mm lens, and wanted a tighter shot. I was so nervous that opening my camera bag would be noticed by the competitors. I hope that didn’t happen, I tried to be so quiet. With a zoom, this wouldn’t be an issue.

Which zoom? On the Sony E Mount system, the reach and quality of the 18-105 F4 G series (SELP18105G) would seem to be a good fit. The longest lens I had with me was a 50mm, and I was wishing for longer options. It’s a constant aperture. I wish it was a bit faster, but it would only be a problem in the most dim rooms. I found that most of the time I was shooting f3.5 to 5.6. Of course the ISO was almost always at 1600 in the classrooms. Assuming I can continue to push the ISO that high, losing a couple of stops of light might be a decent trade off for the extra length. But at $500+, it’s out of reach for now.

Another option would be to adapt an older zoom of similar reach. You can often find vintage 35-105mm zooms for cheap. Just read the reviews on each one and make sure you have the proper adapter. Of course, you give up all automatic functions with these. I just ordered a Vivitar (Made by Koburi) 35-105mm f3.2-4 Macro lens for $26, shipped. I already own the right camera mount adapter. It won’t be as sharp or easy to use as the Sony 18-105mm. And I wish it was a constant aperture, but I’m hopeful it can fill the gap until I can swing the money. I’m sure I will still carry the 19mm and 35mm primes I have, but the 35-105mm could be my go to glass for future shoots.

A shotgun mic would help. Prior to the event I though I had worked out how to use a small shotgun (Rode VideoMicro) and record it into my phone. My goal was small footprint. I did not want to call attention to myself. I didn’t want to set up a full size shotgun with an external recorder. I tested the small shotgun, and would have sworn that I had the cabling worked out. But the day before the event I was charging batteries, and set up the mic to test it once more, and discovered that it was not passing signal. I needed a special cable to convert the TRS connection to a TRRS for the phone input. (Rode sells one: the SC7). I didn’t have time to get the proper adapter, so I punted. I ended up using the omni directional Smartlav+ to record audio. And, while it’s not as good as… pretty much any directional microphone at a distance, it was a lot better than the on camera mic. With some post work, some of the audio will be usable. But a shotgun mic would have been a huge help.

A camera with an audio input would help. My a6000 is a solid mirrorless camera. But it isn’t perfect, and one of the flaws is that it lacks an external audio input jack. While I would probably still use the Smartlav+ with my phone, having an on camera shotgun, recording directly into the camera would be good. Even if the small shotgun had worked, mounting the mic to my camera and then extending the cable to my phone would have been awkward at best. A much simpler solution would be to shoot on a camera that actually has the ability to record external audio. Of course the simple solution costs hundreds of dollars.

Get permission. I mentioned that this was a guerrilla style shoot. I got verbal permission from the judges in the room, and competitors. But the competitors are minors. So in order to actually use the footage I shot I cannot show any faces of minors since I don’t have permission from parents. They cannot be recognizable. I won’t identify the location, or even the organization. I knew that going in, so I shot accordingly. It would have been infinitely better to have the written permission from the event organizers, the location, and every parent of every student in each round. That wasn’t feasible for this project. In the future, I want to do more to get permissions, so I won’t be as constrained on the shoot.

As I’m closing in on the final edits of the project, I’m fairly well satisfied with it. Assuming I do similar projects later what I’ve learned with help make them even better.