I’ve been writing about upgrading the audio in my 2010 Honda Fit Sport. I did not want to rip out the dash, so I have been working on some alternative upgrades. But, one upgrade that could have huge benefit is to reduce the noise coming into the cabin.

One of the first things I noticed when I got the car was that the road noise was terrible. Most small cars are loud, but this one was especially loud, harsh. Add to that, some of the roads in ETX have this weird surface that is even louder.

But, I did not want to tear the entire interior out of the car, and deaden everything. I wanted to try to deaden what I can without too much tear out or expense. So I got 18 square feet of 80 mil Kilmat, a butyl and foil sound deadener. It is self adhesive.

After some research, I chose to apply it in the front floor, hatch and around the rear axle.

Here’s how it worked out:

The DB meter is a free app off the Apple Store. I doubt it is specifically accurate, but I hoped it was consistent from pre to post deadening.

As you watch, you will notice that the mount I was using for the pre- recording is different from the post- recording. The mount broke in between videos. An iPhone XR has mics on the front and bottom. The old mount had a hole in the bottom to let cables and audio through. So, the post- recording is still similar, though somewhat more open to the mics. If anything, this makes the DB meter more sensitive, and puts the post- deadened audio at a disadvantage. but I don’t think it had much impact, over all.

You can see the change wasn’t huge, but it was significant, in that the frequencies that were deadened were the higher ones. It makes the driving experience more pleasant by reducing the harsher noise.

The added benefit is that the frequencies reduced are also the one where music and melody play. While, low bass sounds won’t be helped, I’ve noticed that music sounds clearer at speed.

So, is it worth it? The deadener costs a little over $30 (at the time of writing). The install was done in a few hours. It did not require seat removal. The overall volume reduction was not huge, but what was reduced were the frequencies that interfere with music most and make the road noise harsh. Overall, not a bad investment. 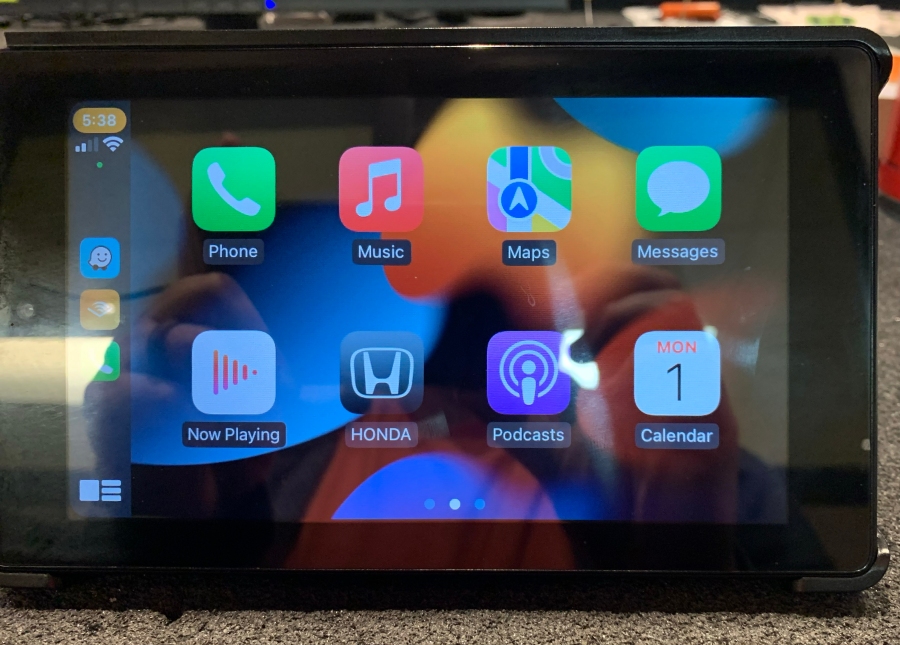 I’ve been writing about this new car audio set up in my Honda Fit.

I took it on a longish trip, about 7 hours one-way, over Thanksgiving. Before I left I swapped the 5W Qi charger for a thinner 10W charger, and that worked great. I actually moved this set up to a different car for this trip, but the operation was the exact same.

The only issue I had was having to reboot a few times at the beginning of the trip back. I’ve had that a couple of times around town, as well. Normally when the temperature is cold. (Not sure that’s a cause, but seems to be a correlation, anyway) After a couple of reboots, it starts working.

Once it’s running, the CarPlay software didn’t miss a beat. The 10W charger kept the Kindle charged up, and my phone charged up.

UPDATE: Have now used the system on a longer trip, 15+ hours of driving one way. No issues. It worked great. Charged fine, no glitches. I have had a few times around town where the Waze app doesn’t follow correctly. And a couple of times when it rebooted several times before thing worked right. But on that trip is was stellar.

Even with the glitches, it works well enough to be useful.